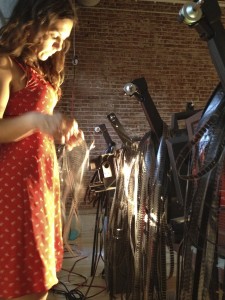 Lindsay McIntyre (she/her) is a filmmaker and multi-disciplinary artist of Inuit and settler descent. She has an MFA in Film Production from Concordia University and a BFA in Painting and Drawing from the University of Alberta. Her multiple award-wining short documentaries, experimental films and expanded cinema performances are often process-based and for some she also makes her own 16mm film with handmade silver gelatine emulsion.

Working in 16mm film using experimental and handmade techniques, her short films circle themes of portraiture, place, form and personal histories. Interested simultaneously in the apparatus of cinema and representation, she bridges gaps in collective experience and remains dedicated to integrating theory and practice, form and content. Current research involves the auto-ethnographical exploration of intergenerational trauma and the grandmother effect as a biological survival mechanism, as well as a SSHRC funded research and creation project linking land use, art practices, cultural knowledge and resource extraction in the circumpolar north.

She was named the 2021 Women in the Director’s Chair Feature Film Award winner, the Victor Martyn Lynch-Staunton recipient for Excellence in Media Arts by the Canada Council (2013), was honoured with the REVEAL Indigenous Art Award (Hnatyshyn Foundation, 2017) and her personal documentary Her Silent Life won Best Experimental Film at imagineNATIVE (2012). She has been a member of the Double Negative Collective, EMO Collective, artist-run film labs, and an international consortium of emulsioneers. She is also honoured to have participated in the 2020-2021 edition of Women in the Director’s Chair Story & Leadership program, Women in View’s Five in Focus: Indigenous 2021, and WIFTV’s Trickster’s and Writers.

Having made over 40 short films over the past 20 years, she is transitioning to the field of narrative to make powerful and authentic features and series as a director, beginning with her first feature The Words We Can’t Speak (currently in development). She hopes to share authentic stories including from the generations of urban Inuit who have been displaced from Inuit Nunangat. Recent projects include an animated documentary for INUA at Qaumajuq, Ajjigiingiluktaaqtugut: We Are All Different (2021) which earned a special mention as one of 2021 VIFF’s Best Shorts and was nominated for Best Animation at the American Indian Film Festival, a Telus Optik Local documentary Final Roll-Out: The Story of Film (2018), an award-winning short Where We Stand (2015), about the state of analogue film in the digital age, and a monumental projection-mapping installation on the Vancouver Art Gallery, If These Walls (2019).

Her short documentaries, experimental films and expanded cinema performances have been seen around the world and can be found in several permanent collections. She is an Associate Professor of Film + Screen Arts at Emily Carr University of Art and Design on unceded Coast Salish territories and she teaches film anywhere else that people will listen. She is the mother of Alice Miron.

contact me at email.linds@gmail.com for passwords to videos or more information